‘Storm Pro-Motion’ – the name screams the best feature, its overall pro-level ball motion. Made in collaboration with none other than our very favorite Jason Belmonte, the professional bowler who has 25 career 300 games in PBA Tour events through 2020. The previous two Belmo balls- Storm Timeless and Storm Drive have gained lots of positive feedback. So Storm collaborated with Jason Belmonte again to design the Storm Pro-Motion. Whether you liked or disliked the Timeless and Drive balls that don’t matter because Storm Pro-Motion is completely different than those two reaction-wise. So, let’s dive right into the thorough Storm Pro-Motion Review.

Why You Should Pick It?

Pro-Motion is here to serve you with maximum strength, great control and continuation, spectacular ball motion, and top-notch performance overall. 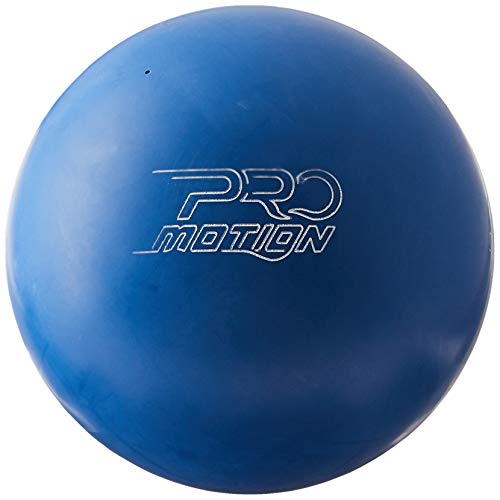 One of Storm’s newest addition to its Signature line is Storm Pro-Motion. Unlike the previous two Belmo balls, Pro-Motion has the SPEC solid reactive coverstock. This is the same cover you’ve seen in Storm Crux Prime. The cover reads the lane better than any other solid reactive bowling balls. It blends out to the pattern well and not sensitive to slight changes in pattern. The SPEC coverstock brings out the best of this ball- solid rolling and predictable ball motion.

Pro-Motion is sanded to a matte finish at a 200-Grit Abralon from the factory. The SPEC solid reactive cover makes this version of the ball far more usable for a wide range of bowlers. The 2000 Abralon box finish doesn’t give players any trouble handling the medium to heavier oil volume or the longer length.

The ball is a beauty- inside and out. For the weight-block, Storm has come up with a brand new symmetrical core called Piston. It produces a total differential of 0.049″ and an RG of 2.52″, giving you five to six inches of track flare in the oil patterns. Although Crux Prime and Pro-Motion have the same coverstocks, the core of Pro-Motion signifies a totally different reaction than the heavy rolling and early Crux Prime. The combination of a strong cover and weaker symmetrical Piston core makes this ball super versatile and usable.

Belmo balls are always great-looking. Although the previous two had color swirling, storm Pro-Motion has a solid matte steel blue color. Besides, Storm’s official logo, you’re also getting the original Belmo logo at the back that signifies the collaboration with Jason Belmonte. Storm has also added a special vanilla snap fragrance to Storm Pro-Motion to make bowling fun and help you concentrate better.

Bowling enthusiasts will immediately fall in love with this ball. On top, Storm Pro-Motion is a great professional benchmark ball that gives you lots of options in terms of creating different shapes and layouts. This is exactly what bowlers look for when bowling in different environments.

The ball delivers a predictable mid-lane grab a.k.a bite and then makes a strong transitioning arc all the way through the pins. Its strong overall breakpoint shape makes the ball hit the pins like a truck. Pro-Motion goes long and flips hard at the backend, and that’s why it hits the pocket just like an ideal heavy/sweeping arc-motion ball supposed to do. You can get finesse out of this ball as long as the lanes are oily.

Pro-Motion feels like a combination of Phaze II, Idol Pro, and the IQ Tour in the same vein. It’s not as early as the Idol, nor slow down lane as IQ Tour, and it’s every bit as versatile as the Phaze II, maybe even more so. But Pro-Motion is big on control and continuation.

Its biggest strength comes from the SPEC cover, but you get a controlled hook due to its core. With such a low RG and high total differential, the Pro-Motion is born to hook. It gets to a particular spot on the lane and then makes a turn that isn’t really a flip but is more like an arc. Moreover, it has high flare potential (5”-6”) which makes it perfect for unlimited strikes.

When a Storm ball is made by collaborating with a professional player, you know, you can never go wrong with this ball. The love this ball has received by far is something incredible. We cannot imagine any bowler who would not like the Storm Pro-Motion. So, you see what a masterpiece this ball is? Whether you’re a pro or an advanced player, add this bowling ball to your arsenal before your upcoming tournaments and league games. So, dazzle up your bowling performance with the Storm Pro-Motion bowling ball.