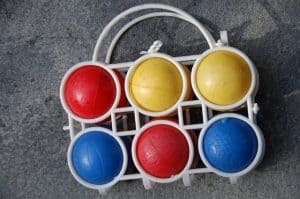 Are you getting better in bocce ball day by day? Then you might be thinking about taking your game to the next level. To become a pro bocce player, you will need the most professional bocce ball set you can find in the market. To reduce your hassle, we have narrowed down the top 5 professional bocce ball sets- packed with quality to match your skill levels. So, without further ado, let’s dive right into the detail-oriented reviews.

Amazon has introduced their very own bocce ball set which is currently now one of their best-selling gaming product. How great is that? Recommended by hundreds of players who loved the overall performance of this bocce ball set.

Amazon’s own bocce ball set comes highly recommended by players who have played with it and liked it. As this bocce set comes in two non-regulation sizes – 90 mm and 100mm, you can choose whether you want to go for lighter ones (90mm) or slightly heavier ones (100mm). Although they’re not exactly the regulation size, you can still use them in tournaments and defeat other serious opponents.

The set includes 4 red bocce balls, and 4 green balls, 2.45 lbs each. It also includes a white pallino (a.k.a. jack) and a measuring instrument to help you get the exact distance between the bocce ball and the Pallino. The durable equipment has a poly-resin composite core and colorful coating for longevity and strength.

Amazon mentioned that this particular set is mainly for people over 14 years old. But the lighter version is best for kids and older people, who just want to have a fun time. The heavier one, on the other hand, is for adult professional bocce players. The whole set is delivered in a black portable case, which makes the storing system easy as well.

Want to take your bocce set to the next beach party? Or want to practice in your backyard for an upcoming tournament? Either way, the ROPODA bocce ball set got you covered. ROPODA received most of its 5-star ratings for its versatility. While Amazon’s set is bound for 2-4 players only, you can play with the ROPODA professional bocce set among 2-8 players.

Almost similar to the GoSports bocce set (which we will talk about soon), the ROPODA bocce ball set offers 8 balls in total- 2 of them are red, 2 are green, 2 are blues, and the remaining 2 balls are yellow. The 90mm size is perfect for everyone to have a good time playing with it. On top, the quality is amazing considering the price point.

This professional set also includes a white jack and a rope for measuring purposes. The durable resin core inside makes those bocce balls indestructible. You can use them for a lifetime, and they will function just fine. The balls will feel solid and hefty in the hands and will ensure accuracy in throwing. Hit hard or roll slow, these bocce balls won’t crack or break.

Next, we have another most professional bocce ball set, manufactured by GoSports. Considering the quality, performance, and versatility, this bocce ball set is an absolute winner. GoSports offer their customers, not one, not two, but three different types of bocce set for players of all age and skill levels. They have the LED Light-up set, Soft Rubber bocce ball set. Today we will review the Classic Resin bocce ball set.

The set contains 8 premium quality bocce balls- 2 red, 2 green, 2 yellow, and 2 blue balls, each with a 90mm diagram. The patterns on the same colored balls are different too. 4 balls have the Circle Cut design, while the rest have the Square Cut design. The 40mm pallino in the set is white in color. Additionally, you’ll get a measuring tool and a canvas carrying bag with your set.

Since the ball have mid-range weight (1lb 11Oz), they are perfect for both professional practice and casual gameplay. Plus, kids over 12 can play with this bocce set too as they’re not too heavy. When the balls will hit off each other, you’ll hear the perfect  ‘knock’ sound- meaning, the resin is of superior quality, and the balls have the capability to tackle high impacts flawlessly. No matter how frequently you use them, they will last a lifetime.

If you’re into fun recreational games like bocce ball, lawn bowls, Cornhole lawn game, skittles, other throwing or tossing games then you might have heard about Hey! Play!. Like their other gaming products, Hey! Play! didn’t disappoint their customers with their finest bocce ball set. This is an excellent alternative for Amazon’s bocce ball set.

Hey! Play! Bocce ball set contains 2 separate colors of balls- 4 reds and 4 greens, with 2 different scoring patterns on them. So, this indicates that this set is for 2 or 4 players competition. If you’re a pro bocce player, just call some of your other super-skilled friends and have a nice time with them practicing. You can also take them to your next bocce tournaments to show off your skills using this set.

The set also contains a 1.5” diameter pallino, whereas the balls have a 3.5” diameter. You’re also getting a heavy-duty black carrying bag (7” length). You can put your balls in that bag and carry them wherever you go. Moreover, Bocce ball is one of the go-to family games, so kids are gonna love it too. You all are gonna have a nice with this backyard party bocce ball set.

Made of high-quality poly-resin (coating), these balls will hold up exceptionally well. No matter how heavy the impact is, they will feel solid and offer great performance for decades. Whether you want to play on a bocce court or on grass, these bad boys got your back!

Take your pro-level skills to the next level with the ultimate professional bocce ball set by Play Platoon. Whether it’s a sunny day in the yard, or the day of your bocce competition, or just fine indoor leisure time, take this beautiful ball set out and have the time of your life. You must be wondering, how can you play bocce ball indoor. Well, Play platoon made the inside of the balls with rubber and only the outside with poly-resin, so you’re good to go!

Like any genuinely nice bocce ball set, Play Platoon ones feel quite rigid in the hands. You can immediately notice its super quality by throwing it for the first time. The set will offer great gameplay for both formal and casual matches with friends and families and your opponents. Plus, the set doesn’t cost too much either considering its durability and versatility.

As always, the set contains 8 premium quality 90mm bocce balls- 2 reds, 2 yellows, 2 greens, and 2 blues. On top, you’ll be getting a 40mm white jack, a measuring rope, and a carrying case for easy transporting. Since there are 4 separate colored balls and 2 different types of patterns on them, the game can be played between 2 to 8 persons (adults and kids).

There’s no question about their quality of products. Play Platoon claims their bocce ball set to last forever. So, if you’re a pro player and haven’t gotten your hands on them, what are you waiting for?

There are some things you should consider before buying a professional bocce ball set. Once you’re aware of that, you can easily choose the best bocce ball set for yourself.

What materials are bocce balls made off?

Traditional bocce balls were made of wood. As time went by and the world evolved, bocce balls went through several standardizations. There were metal bocce balls and baked clay bocce balls. Later manufacturers started producing PVC plastic, or a mixture of plastics bocce balls. Now, the best bocce ball sets are generally made of solid resin that makes the balls highly durable. Unfortunately, solid resin is quite expensive, so now, some companies make bocce balls out of recycled materials, such as hard plastic. But the downside is that the coating of the polyresin or the plastic ones fades easily. Those who want a set for indoor bocce should go for soft or medium-hard rubber.

Why are bocce balls different colors?

The highest number of players that can be in a bocce match is 8 (or 4 teams), and so the bocce ball sets contain 8 balls. To identify which ball is whose, different colors of balls are very helpful. Some sets offer every ball in the same color, but they have numbers or patterns on them that are different from each other. Some sets have balls in only 2 colors, and each same color balls have 2 different patterns on them so they can be differentiated. These particular sets are for 4-players games (or 2 teams) only. Nowadays you can find sets that have 4 individual colors of balls, and each same color balls have a different pattern/design on them to help players differentiate. Different colors of balls help players or teams to understand whose ball is the nearest to the pallino and measure the distance of that.

No, bocce balls are generally not heavy. The ones we have mentioned today are pretty lightweight for teens and adults. But if toddlers play they should be under the supervision of adults and theirs shouldn’t be more than 1.2lbs. The 2lbs ones are mainly for professional bocce players.

The in-depth reviews and distinct guidelines will hopefully help you buy the next worthy bocce ball set. We want nothing but your success in your professional journey in bocce. Bocce is a very fun game. So, while you play or practice, we want you to enjoy the full essence of bocce with a good bocce ball set. Have unlimited joy and good luck with your career in the bocce game.

Have you recently gained an interest in bowling? Are you loving it so far? If yes, I assume you have recently purchased an entry-level bowling ball and to carry that with comfort, you need a bowling...

Are you a perfectionist? Are you never a risk-taker? Then you surely would love to enjoy bowling with excellence despite the circumstances. And what is the best way to do that? Expect the unexpected!...